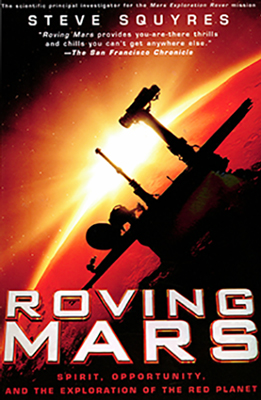 Author, Roving Mars: Spirit, Opportunity, and the Exploration of the Red Planet

Steven W. Squyres is the James A. Weeks Professor of Physical Sciences at Cornell University, and is the Principal Investigator for the science payload on the Mars Exploration Rover Project. He received his Ph.D. from Cornell in 1981 and spent five years as a postdoctoral associate and research scientist at NASA’s Ames Research Center before returning to Cornell as a faculty member. His main areas of scientific interest have been Mars and the moons of the outer planets. Research for which he is best known includes study of the history and distribution of water on Mars and of the possible existence and habitability of a liquid water ocean on Europa.

Dr. Squyres has participated in many of NASA’s planetary exploration missions, including the Voyager mission to Jupiter and Saturn, the Magellan mission to Venus, and the Near Earth Asteroid Rendezvous mission. Along with his current work on MER, he is also a co-investigator on the Mars Express, Mars Reconnaissance Orbiter and Mars Science Laboratory missions, a member of the Gamma-Ray Spectrometer Team for the Mars Odyssey mission, and a member of the imaging team for the Cassini mission to Saturn.

Dr. Squyres chaired the most recent planetary decadal survey for the National Research Council. He has also served as Chair of the NASA Space Science Advisory Committee and the NASA Advisory Council. His awards include the American Astronomical Society’s Harold C. Urey Prize, the Space Science Award of the American Institute of Aeronautics and Astronautics, the American Astronautical Society’s Carl Sagan Award, the National Space Society’s Wernher von Braun Award, and the Benjamin Franklin Medal of the Franklin Institute. He is a fellow of the American Academy of Arts and Sciences. 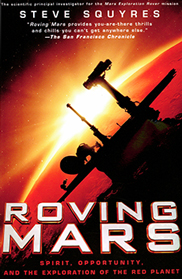 It's the age-old question: Is there life on Mars Steve Squyres, lead scientist of NASA's Mars Exploration Rover mission, sets out to answer that question and relates his findings in this riveting first-person narrative account. Steve Squyres is the face and voice of NASA's Mars Exploration Rover mission. Squyres dreamed up the mission in 1987, saw it through from conception in 1995 to a successful landing in 2004, and serves as the principal scientist of its $400 million payload. He has gained a rare inside look at what it took for Rovers Spirit and Opportunity to land on the red planet in January 2004 -- has been a key member of the team directing their day-today movement on Mars ever since, and knows firsthand their findings.

Steve Squyres - Roving Mars: Spirit, Opportunity and the Exploration of the Red Planet

Lecture at the Florida Institute of Human and Machine Cognition - 2012

"Cornell University scientist Squyres is the principal investigator on the Mars missions that landed the rovers Spirit and Opportunity in January 2004. Expected to operate for only a few weeks, they are still going strong a year and a half later. But as Squyres recounts, their development was plagued with problems, and shortly before the launch of Spirit, it looked like the missions might be scrubbed; the giant landing airbags had failed in test after test. Spirit has endured a communications breakdown and a troublesome rear wheel, but Opportunity quickly found geological evidence for the existence of water millions of years ago. Squyres relates the toll that monitoring the rovers took on his colleagues. The Martian day is 39 minutes longer than a day on Earth, so the team had to reset their watches and their internal clocks to work, eat and sleep like Martians. Squyres communicates the excitement and the anxieties involved in a project of this magnitude, steering clear of technical jargon, though more casual science buffs might want to fast-forward occasionally in early chapters packed with detail on the ins and outs of NASA's approval process for proposals and institutional politicking."  Copyright © Reed Business Information, a division of Reed Elsevier Inc. All rights reserved. --This text refers to the Hardcover edition.

"NASA's two rovers, Spirit and Opportunity, which are currently driving around Mars, have been astoundingly successful; but as Squyres recounts, they came close to staying earthbound. Buffeted by budgetary and technical problems, the rover missions received the green light only in 2001, giving the engineers and scientists just two years to get ready for a 2003 launch. The resulting freneticism of prelaunch preparation permeates Squyres' blow-by-blow narration of his work, which concentrated on several instruments. A geologist designated as the lead scientist for the missions, Squyres had to negotiate with engineers to fit his stuff on their spacecraft--a fundamental antagonism in the space--exploration business. In fact, Squyres bluntly states he distrusted the lead engineer, Peter Theisinger. The working out of their differences, amid other examples of mollification between engineers and scientists, depicts the daily human drama (from Squyres' viewpoint) of diagnosing and solving technical problems, an angle that ought to augment the author's base readership of space-program fans. Couched in conversational prose, Squyres' enthusiasm for exploring Mars shines brightly." Gilbert Taylor, Copyright © American Library Association. All rights reserved --This text refers to the Hardcover edition.