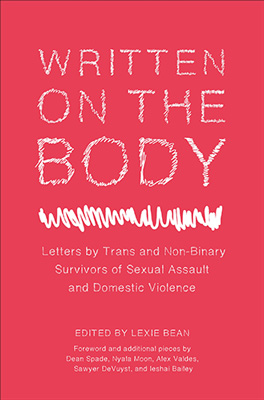 A Panel & Conversation with Trans Survivors of Domestic and Cultural Assault Featuring Contributors of the Book:

Written on the Body: Letters from Trans and Non-Binary Survivors of Sexual Assault and Domestic Violence, Edited by Lexie Bean — Selected as one of the"50 Best LGBT Books of 2018" by Autostraddle.com and a 2019 Lambda Literary Award ("Lammy") finalist.

In a panel that shares a range of personal experiences from the transgender community, audiences have the opportunity to get acquainted with the people too often dehumanized in society and interpersonal relationships. They speak on trans people’s struggle to find safety at home, in the body, and other unwelcoming places. Panelists are all contributors to the book, Written On The Body: Letters from Trans and Non-Binary Survivors of Sexual Assault and Domestic Violence, edited by Lexie Bean, (2019 Lambda Literary Award finalist).

The program begins with each panelist presenting short readings of their letters from the book and/or their personal essays. It then transitions into a conversation among the panelists about issues faced by themselves and other transgender people, which includes access to basic health care, counseling, community support, experiences with law enforcement, why trans people are so vulnerable to assault and how justice for a trans person experiencing violence can be illusive, thereby leaving them vulnerable to repeated violence and assault. The conversation shifts to the deeply personal as panelists address relationships with their own transitions, and everyday life changes which take many forms, such as: taking hormones, changing one’s name, choosing their pronouns, expressions in clothing, physical and emotional changes, access to healthy relationships, and more. At the core is maintaining autonomy over their own bodies and stories. A lively Q & A and extended conversation follows with the audience.

Thisan interactive, experimental writing experience is led by our panelists. The workshop uses storytelling, visual art and light-movement to access new ways to explore and write about our unique experiences in our own bodies, especially for survivors and trans people who often struggle to find safety within themselves. Participants will also have the space to acknowledge who they are outside of their relationships and labels, nurtured by mutual time for individual and group listening, self reflection and sharing. We are open to all gender expressions; there would also be a peer advocate available on site.

MEET THE PANELISTS  (Three of the following will attend each engagement)

Lexie Bean is a queer, performance and trans multimedia artist from the Midwest. Their work in film, literature, and curation revolves around themes of bodies, homes, cyclical violence, and LGBTQIA+ identity. Lexie is a member of the RAINN National Leadership Council and a Lambda Literary Award Finalist; they're passionate about creating honest and complex trans narratives that "transition and grow" alongside them. Their writing has been featured in Teen Vogue, Huffington Post, The Feminist Wire, Ms. Magazine, Them, Logo's New Now Next, Bust Magazine, Autostraddle, and more. The Ship We Built is their debut novel supported with residencies at the Sundress Academy, Paragraph New York, and the Santa Cruz Bookshop. Like the protagonist, Lexie has a deep resonance with water, letter writing, and is also a survivor of childhood sexual abuse.

Preferred Pronoun: “They” or "He"

Sawyer DeVuyst is an artist, model & activist based in New York City. His work can be seen in Forbes, The Advocate, OUT Magazine, Barneys, Milk.xyz, VMan, Refinery29 and many others. He is a published writer and an anti-shame advocate for transgender folks of all/no gender/s. He is a shy Leo, a middle child and he lives in Brooklyn, NY.

Preferred Pronoun: “He” or “They”

Summer Minerva, MS Ed is a multi-disciplinary artist, educator, and polyglot. Their current performance and film work center the intersections of gender and spirituality and how identity labels inform our sense of who we are. Their performance work has shown around the world in New York City, Rio de Janeiro, and Napoli. They are currently in process with a full-length autobiographical documentary film which traces Summer’s ancestry to the 3rd gender of southern Italy.

Alex Valdes is a multimedia artist and musician from Brooklyn, NY.  Fascinated by the social construction and radicalization of beauty, they seek moments of extremity within sound and performance. Their work intends to subvert the limitations of their physical presence while emphasizing the ever building and dismantling of self identity.  They are a member of Haul Gallery, an anti-capitalist institution in pursuit of offering an alternative model to the blue chip art industry. Since 2015 they have performed under the name Reagan Holiday at Issue Project Room, Melting Point and various DIY spaces all over New York City.

Nyala Moon is an actor, writer and filmmaker. A graduate of Baruch College, she is a New York native with southern roots. Nyala has had a love affair with cinema ever since she first saw Casablanca and The Good, the Bad and the Ugly with her grandparents. After working 6 years in the nonprofit community helping other transgender and queer people of color access affirming health care, Nyala took a leap of faith and pursued her passions for filmmaking. In early 2017, Nyala produced her first project, NOVA, a short film about a black trans women exploring the intersections of her life. In fall 2017, she directed and produced with Ariel Maher and Daquisha Jones , Bad Ally, a web series you can see now on youtube. Nyala ended 2017 working on her second film short film, Two Trans Women. Nyala is a contributing writer for the book, Written on the Body: Letters from Trans and Non-binary Survivors of Sexual Assault and Domestic Violence, edited by Lexie Bean. Nyala is currently working on her third short film, Cold Cornbread, which is to start principal photography in late July. She is working on launching a production company with her producing partner, Eileen Makak, to help other queer people tell their own stories. When Nyala isn’t making films, she is working with youth at Housing Works, being a plant mom to her 20 house plants and taking portraits of her friends. You can catch her on instagram @nyalamoon.

Written On The Body

Written by and for trans and non-binary survivors of domestic violence and sexual assault, Written on the Body: Letters from Trans and Non-Binary Survivors of Sexual Assault and Domestic Violence, edited by Lexied Bean, offers support, guidance and hope for those who struggle to find safety at home, in the body, and other unwelcoming places.

TRANSparency: Speaking Our Truths is a Panel Conversation with three Trans Survivors of Domestic and Cultural Assault who contributed to the book.

This collection of letters written to body parts weaves together narratives of gender, identity, and abuse. It is the coming together of those who have been fragmented and often met with disbelief. The book holds the concerns and truths that many trans people share while offering space for dialogue and reclamation.

Written with intelligence and intimacy, this book is for those who have found power in re-shaping their bodies, families, and lives.

"We had a full room of students, staff, and even parents ready to witness and contribute to this incredible conversation on challenging cultures of violence, exploring identity, and rewriting trauma narratives for collective healing. The audience was present and engaged as Lexie, Alex, and Nyala shared their personal letters written to body parts, talked about how the anthology has affected their lives since it was published, discussed barriers to accessing support that trans and gender non-conforming folks face, described what their dream futures of trans care and support could look like, and explored what questions they're countering and encountering during this particular political time.

As one student wrote, "For me, it touched upon areas of my own identity that I have often questioned because of experiences that have made me feel uncomfortable both in my identity and body. This panel was so impactful for trans/non-binary bodies who have experienced assault but were never taken into consideration within the movements calling out this kind of abuse." Another student said, "As a trans survivor of sexual violence, I am really grateful for the experience of hearing their stories and conversation with the audience, and walk a little lighter knowing that this intense intersection is being named and held with love."

And as a community located on a college campus, where issues of sexual violence and supporting survivors often come up, one of our staff members said, "As a violence prevention educator, I believe that half the battle in this work is making that which is invisible, visible. To break the silence and shame that so often surrounds experiences of sexual violence, particularly for queer and trans survivors, is an incredibly powerful form of resistance. And to bear witness to that was an honor."

Lexie, Alex, and Nyala were brilliant in their vulnerability, bringing both raw emotion and honest thoughts to the room, leading our audience in doing the same.  It was truly a radical conversation, one that we rarely if ever hold in public, that is creating space for listening to trans survivors and shifting our experiences of violence together from individual defense to community care." 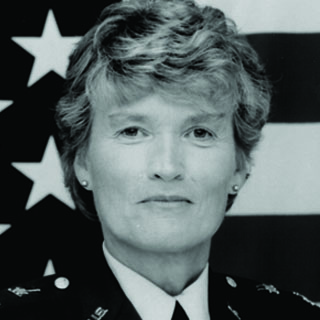