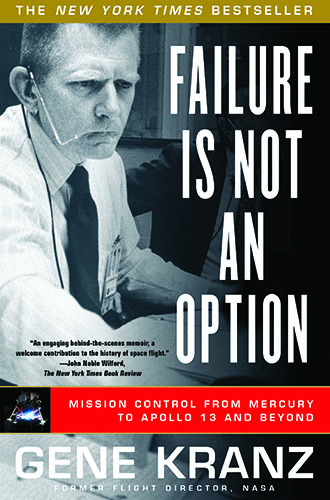 Failure Is Not an Option

Mission Control From Mercury to Apollo 13 and Beyond

This memoir of a veteran NASA flight director tells riveting stories from the early days of the Mercury program through Apollo 11 (the moon landing) and Apollo 13, for both of which Kranz was flight director.

Gene Kranz was present at the creation of America’s manned space program and was a key player in it for three decades. As a flight director in NASA’s Mission Control, Kranz witnessed firsthand the making of history. He participated in the space program from the early days of the Mercury program to the last Apollo mission, and beyond. He endured the disastrous first years when rockets blew up and the United States seemed to fall further behind the Soviet Union in the space race. He helped to launch Alan Shepard and John Glenn, then assumed the flight director’s role in the Gemini program, which he guided to fruition. With his teammates, he accepted the challenge to carry out President John F. Kennedy’s commitment to land a man on the Moon before the end of the 1960s.

Kranz recounts these thrilling historic events and offers new information about the famous flights. What appeared as nearly flawless missions to the Moon were, in fact, a series of hair-raising near misses. When the space technology failed, as it sometimes did, the controllers’ only recourse was to rely on their skills and those of their teammates. He reveals behind-the-scenes details to demonstrate the leadership, discipline, trust, and teamwork that made the space program a success.

A fascinating firsthand account by a veteran mission controller of one of America’s greatest achievements, Failure is Not an Option reflects on what has happened to the space program and offers his own bold suggestions about what we ought to be doing in space now.

George Greenfield, President of CreativeWell, Inc., approached The History Channel” and secured deals for what became the Emmy nominated documentary film “Failire is Not An Option,” (2003), a history of the U.S. manned space program from Mercury to Apollo 17, as seen by the men of Mission Control and the sequel, ”Beyond the Moon” (2005). The latter picked up after the Moon landings and ending with the shuttle Columbia disaster. Both were directed by Kirk Wolfinger of Lonewolf Productions.

Eugene F. Kranz joined the NASA Space Task Group in 1960 and was Assistant Flight Director for Project Mercury (the original manned space missions). He continued as Flight Director for the Apollo 11 lunar landing. He is a co-recipient of the Presidential Medal of Freedom for his work leading the Apollo 13 teams. Failure Is Not an Option, his first book, was a New York Times bestseller. He lives with his family near Houston.  He is currently writing a book on leadership.

"An engaging behind-the-scenes memoir, a welcome contribution to the history of space flight. More than any previous book, it gives the view of that history as lived by the brotherhood of Mission Control."

"A blow-by-blow account of heroic teams overcoming adversity...No matter how many times you read the story of the Apollo 11 landing, with computer alarms going off and only seconds of fuel left, it is a heartstopper. Here, Kranz recalls it vividly."

"A rich, behind-the-scenes account of the experts who held the lives of America's first space explorers in their hands."

"An important addition to the chronicles of America's early space program."

"With penetrating insight, straight-talking Kranz, tells it like it was for the mission control and planning teams upon whom the astronauts were utterly dependent."