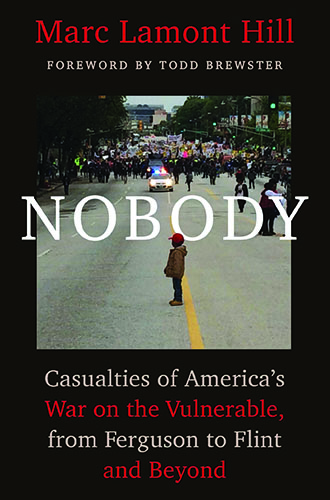 Casualties of America's War on the Vulnerable, from Ferguson to Flint and Beyond

Unarmed citizens shot by police. Drinking water turned to poison. Mass incarcerations. We’ve heard the individual stories. Now a leading public intellectual and acclaimed journalist offers a powerful, paradigm-shifting analysis of America’s current state of emergency, finding in these events a larger and more troubling truth about race, class, and what it means to be “Nobody.”

Protests in Ferguson, Missouri and across the United States following the death of Michael Brown revealed something far deeper than a passionate display of age-old racial frustrations. They unveiled a public chasm that has been growing for years, as America has consistently and intentionally denied significant segments of its population access to full freedom and prosperity.

In Nobody, scholar and journalist Marc Lamont Hill presents a powerful and thought-provoking analysis of race and class by examining a growing crisis in America: the existence of a group of citizens who are made vulnerable, exploitable and disposable through the machinery of unregulated capitalism, public policy, and social practice. These are the people considered “Nobody” in contemporary America. Through on-the-ground reporting and careful research, Hill shows how this Nobody class has emerged over time and how forces in America have worked to preserve and exploit it in ways that are both humiliating and harmful.

To make his case, Hill carefully reconsiders the details of tragic events like the deaths of Michael Brown, Sandra Bland, and Freddie Gray, and the water crisis in Flint, Michigan. He delves deeply into a host of alarming trends including mass incarceration, overly aggressive policing, broken court systems, shrinking job markets, and the privatization of public resources, showing time and time again the ways the current system is designed to worsen the plight of the vulnerable.

Timely and eloquent, Nobody is a keen observation of the challenges and contradictions of American democracy, a must-read for anyone wanting to better understand the race and class issues that continue to leave their mark on our country today.

“With Nobody, Hill marshals the full weight of multiple scholarly traditions to expose complex, ancient, and intersecting injustices of American racism. This is the book that respects Michael Brown, Sandra Bland, Freddie Gray, Trayvon Martin, and all the other lost black women, men, girls, and boys by taking them seriously. This is the book we needed to understand how we got here and to understand what it means to be here. This is the definitive text. It will remain so for generations.”

“Marc Lamont Hill is the most courageous and progressive voice in 'Main Stream Media,’ whose new book, Nobody, is a subtle and persuasive historical and contemporary analysis of our state of emergency in America. He gives new meaning to the now popular idea of "intersectionality" with intellectual gusto and political urgency!”

“An essential primer on the relationship between anti-Black racism and state-sanctioned violence, Nobody chronicles historical and social developments around race, class, gender and the role of the State in America which have served to develop, maintain, and expand an expendable underclass. In Hill’s book we see how repression breeds resistance, the very same dynamic that has led to an upsurge in the Black Freedom Movement that seeks justice for all of us. ”

“Marc Lamont Hill proves once again why he is one of the leading voices on race in America. With its fresh insight and careful on-the-ground reporting, Nobody is a powerful call to action that gives a voice to our most vulnerable communities. As with anything Hill writes, this book is essential reading.”

President and CEO of the Center for American Progress

“Marc Lamont Hill has written the book we desperately needed.  No mere chronicle of recent anti-Black violence, Nobody digs deeper, revealing how the killing fields of urban America were tilled by seven decades of Jim Crow and four decades of neoliberalism, turning the very people who brought the prospect of genuine justice, democracy, and citizenship to America into a disposable nation of ‘nobodies.’  But as Hill reminds us, precarity is not death, the market is not God, and an equitable, just future is in ‘nobody’s’ hands.”