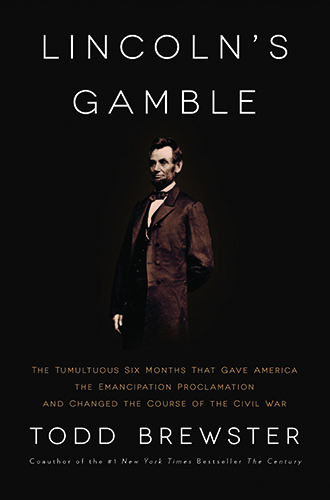 “A masterful psychological portrait” (George Stephanopoulos) of the most critical six months in Abraham Lincoln’s presidency, when he wrote the Emancipation Proclamation and changed the course of the Civil War.

On July 12, 1862, Abraham Lincoln spoke for the first time of his intention to free the slaves. On January 1, 1863, Lincoln signed the Emancipation Proclamation, doing precisely that. In between, however, was a tumultuous six months, an episode during which the sixteenth president fought bitterly with his generals, disappointed his cabinet, and sank into painful bouts of clinical depression. Most surprising, the man who would be remembered as “The Great Emancipator” did not hold firm to his belief in emancipation. He agonized over the decision and was wracked by private doubts almost to the moment when he inked the decree that would change a nation. It was a great gamble, with the future of the Union, of slavery, and of the presidency itself hanging in the balance.

In this compelling narrative, Todd Brewster focuses on this crucial time period to ask: was it through will or by accident, intention or coincidence, personal achievement or historical determinism that he freed the slaves? “Brewster brings elegant clarity to the tangle of conflicting ideologies, loyalties, and practicalities that pushed the proclamation forward” (Publishers Weekly), portraying the president as an imperfect man with an unshakable determination to save a country he believed in, even as the course of the Civil War remained unknown.

“Brewster brings elegant clarity to the tangle of conflicting ideologies, loyalties, and practicalities that pushed the proclamation forward, ultimately ensuring Lincoln’s legacy as the Great Emancipator.”

"In this historical essay about the Emancipation Proclamation, Brewster explores the six months between Lincoln’s July 1862 decision to issue it and actually doing so in January 1863. Inspired by a 1922 article on Lincoln by W. E. B. DuBois, the purpose of which was to portray Lincoln as great but imperfect, Brewster sets as his goal a quest for the “real” Lincoln... Featuring vignettes of figures who met Lincoln during his formulation of the proclamation, Brewster’s work illuminates Lincoln’s lines of thought during this turning point in American history."

“Brewster gets inside Abraham Lincoln’s mind, revealing his struggles with the limited powers of his office. Here is Lincoln, the man, surprisingly ambivalent about the decision for which he is most remembered. A masterful psychological portrait.”

“Readers of this expertly-told tale may note parallels to other times in American history when the lack of a clear mission hampered war efforts. Yet this, finally, is a story of courage and leadership, a stirring account of how Lincoln, perhaps our greatest warrior-president, took firm control of the war, gave clear direction to his generals and, with his historic proclamation, established a purpose worthy of the sacrifices so many made in that epic American ordeal.”

Author of Dereliction of Duty: Lyndon Johnson, Robert McNamara, the Joint Chiefs of Staff, and the Lies that Led to Vietnam

“This story has been told before, but never as well, with such a firm grasp of the revolutionary implications of Lincoln’s decision, or the multi-layered levels of Lincoln’s quite tortured thought process. Although Lincoln is the most written about figure in American history, Brewster’s book is a major entry in the Lincoln sweepstakes.”

“It’s hard to act from strength and a higher moral conviction when the war you’re waging is not going well. But in this wonderful study, Todd Brewster authoritatively evokes the strategy of our best president to change the terms of the Civil War and thereby the destiny of his nation.”

“Mr.Brewster has pulled off his task with aplomb. He navigates a clear path through conflicting accounts, giving us the context necessary to understand why the Proclamation was just so difficult for Lincoln to write….Mr. Brewster’s greatest achievement in this book is to bring nuance back to a story that is often paved over with heroism….Mr. Brewster has done a good job at transforming Lincoln from an American saint back into a man.”

“Journalist Brewster presents an interesting exploration into what was going on in Lincoln’s mind and life during the time before the signing….Of value to anyone interested in this great event in US history.”